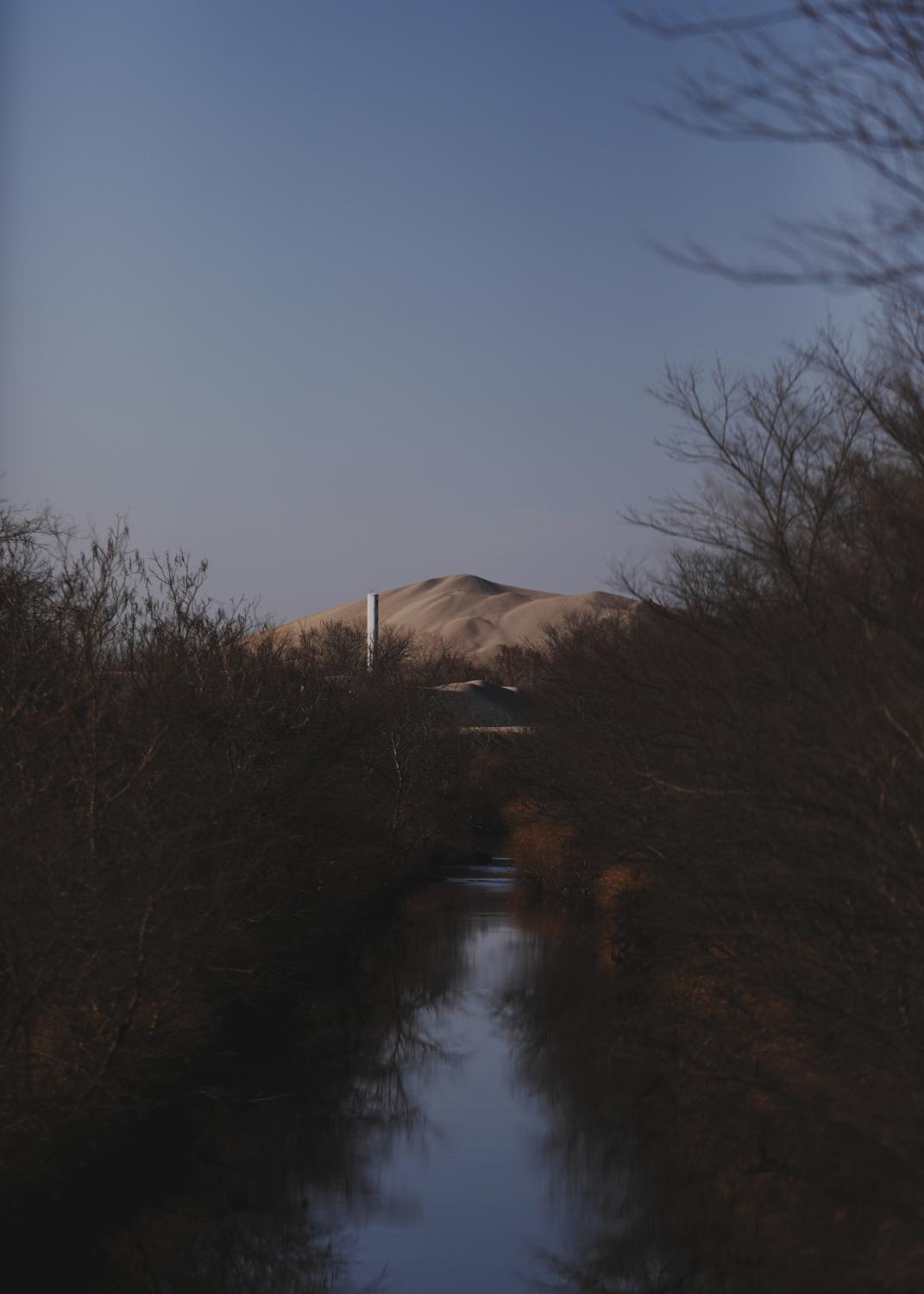 1 / 16
Looking north from the ghost town of Douthat, Oklahoma along Tar Creek a chat pile rises like a mountain from the ghost town of Picher, Oklahoma. Tar Creek runs between the former towns of Picher and Cardin, Oklahoma. The EPA superfund site in the area gets its name from the creek. Water is everywhere around Picher and the surrounding area. When the mines were abandoned around 1970, the miners turned off the water pumps and old tunnels were flooded. The acidic and contaminated water found its way into the local aquifer.
This is an ongoing project​​​​

Picher, Oklahoma was once a prosperous mining town. At its height it was home to
around 20,000 people. The mines closed around 1970 and the population began to take a nosedive from there but it held on until the late 2000s. A study by the Army Corps of engineers which found that a large portion of the town had been undermined and was in danger of collapsing, combined with a major tornado, spelled the end for the town. Now, it's home to less than ten people. In 2009 the town officially ceased functioning and that same year all residents who wanted one were given federal buyouts to leave the town. Four years later the town of Picher was officially dissolved.

“The town was like a family member,” former resident Mitchell Lee said. “If you come
back during the summer you’ll see a lot of people just visiting the old places they used to spend time.”

Sheri Mills, a member of the Picher-Cardin All School Reunion Committee, thinks the
reason the town’s former residents keep making pilgrimages back is the equality among
everyone. 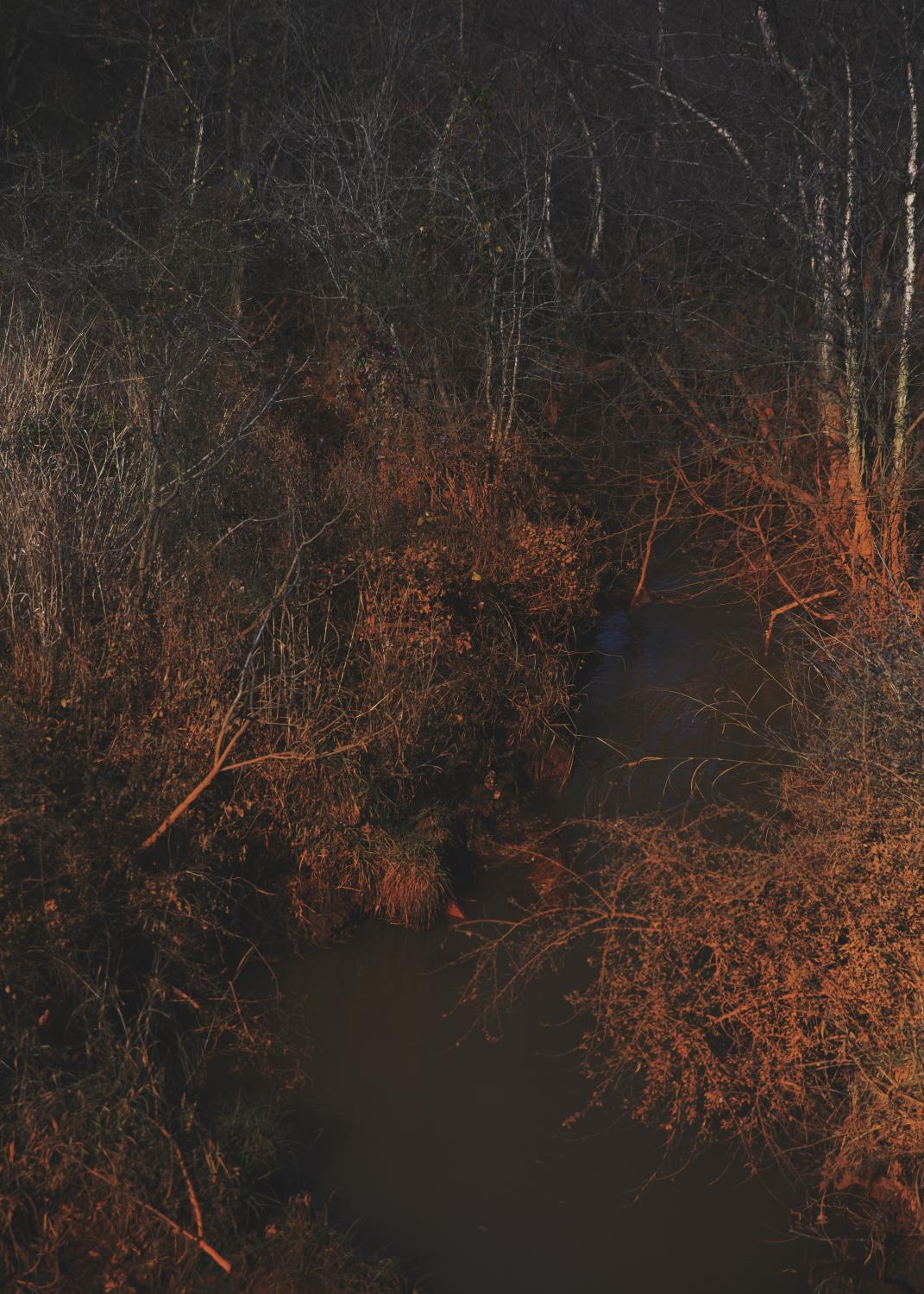 3 / 16
A tiny, unnamed creek flows out from an old mining site near the ghost towns of Picher, Cardin and Douthat in Oklahoma. The orange color on the plants is from oxidized metals which are in the water. The water itself is also orange and acidic from mine waste. This tiny creek flows into Tar Creek. Eventually Tar Creek flows into the Neosho River and from there into the Grand Lake O’ The Cherokees. 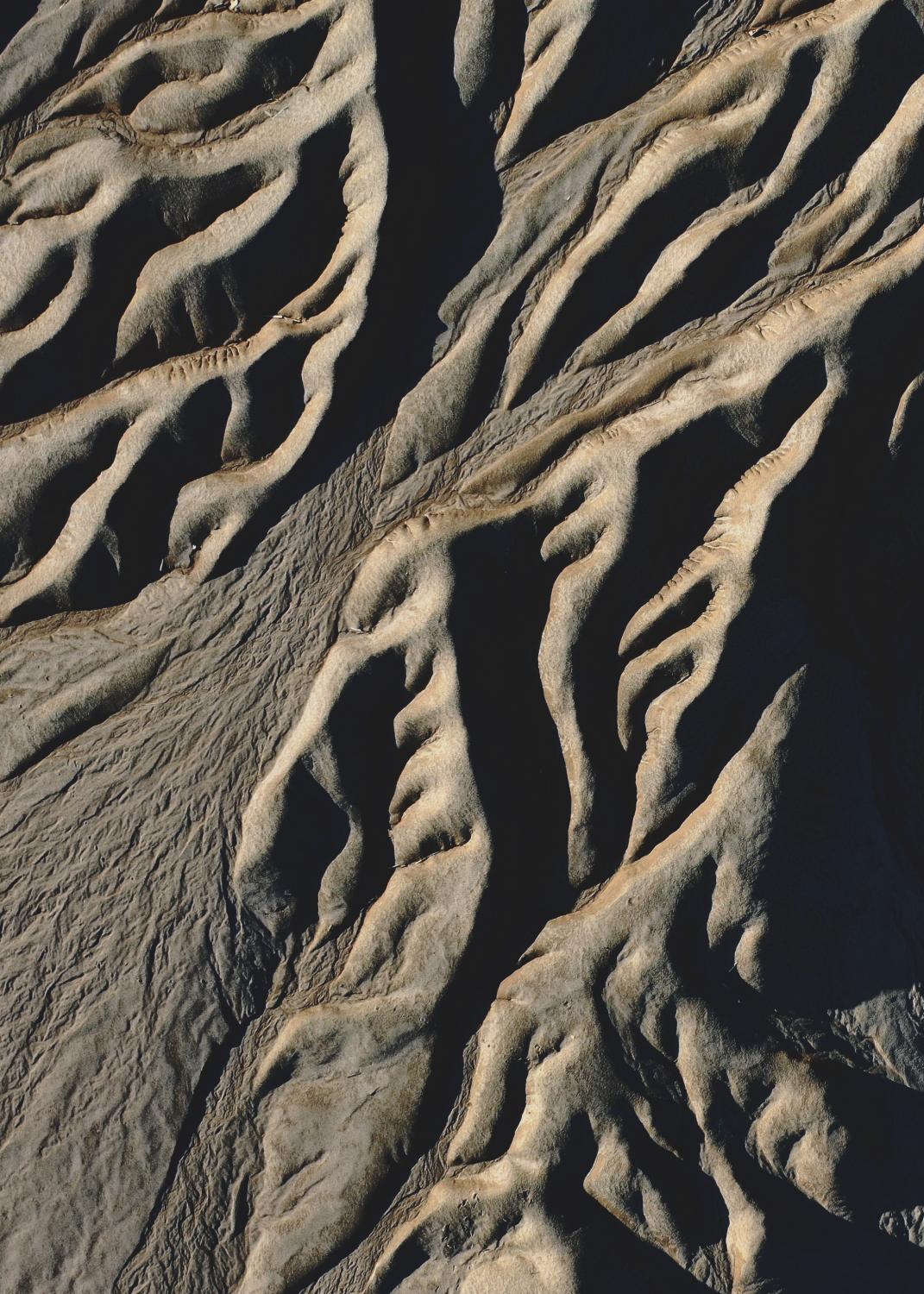 4 / 16
Piles of chat aren't ever very far out of sight in Picher. The piles are leftover mining waste from Picher's past. On windy days the contaminated dust, gravel and grit gets blown all over town. When people lived there people played on and around the chat piles all the time. And, when people lived there, high levels of lead were found in the blood of children. Higher than average rates of miscarriages were reported in women in the area too. 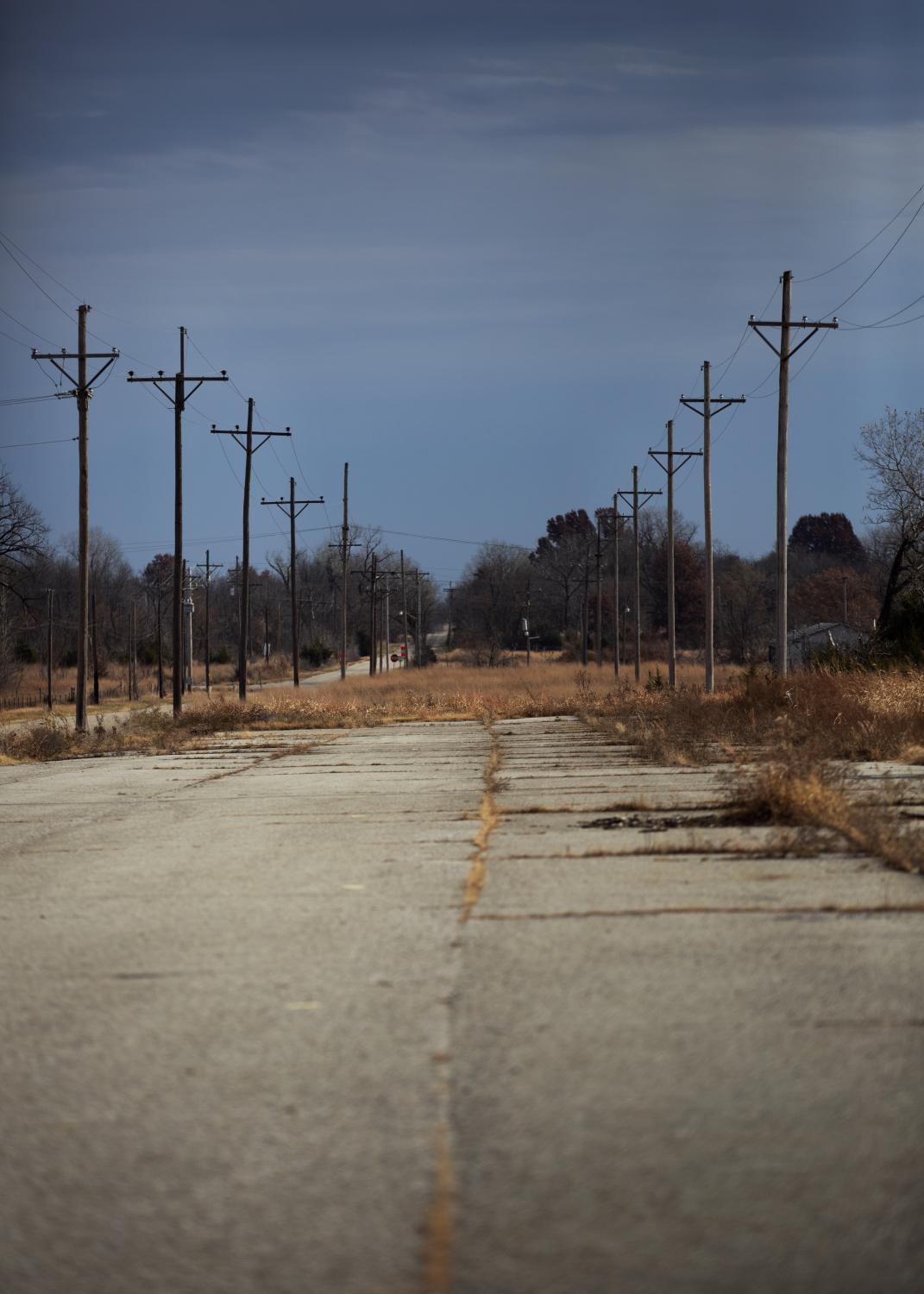 5 / 16
Power lines jut out of the ground all over Picher. Evidence of the town that once was. Mary Ann Heck and her brother Jon Douthitt told me when they were kids they would climb all over the chat piles in town and played ball on the dried remains of a slag pond. 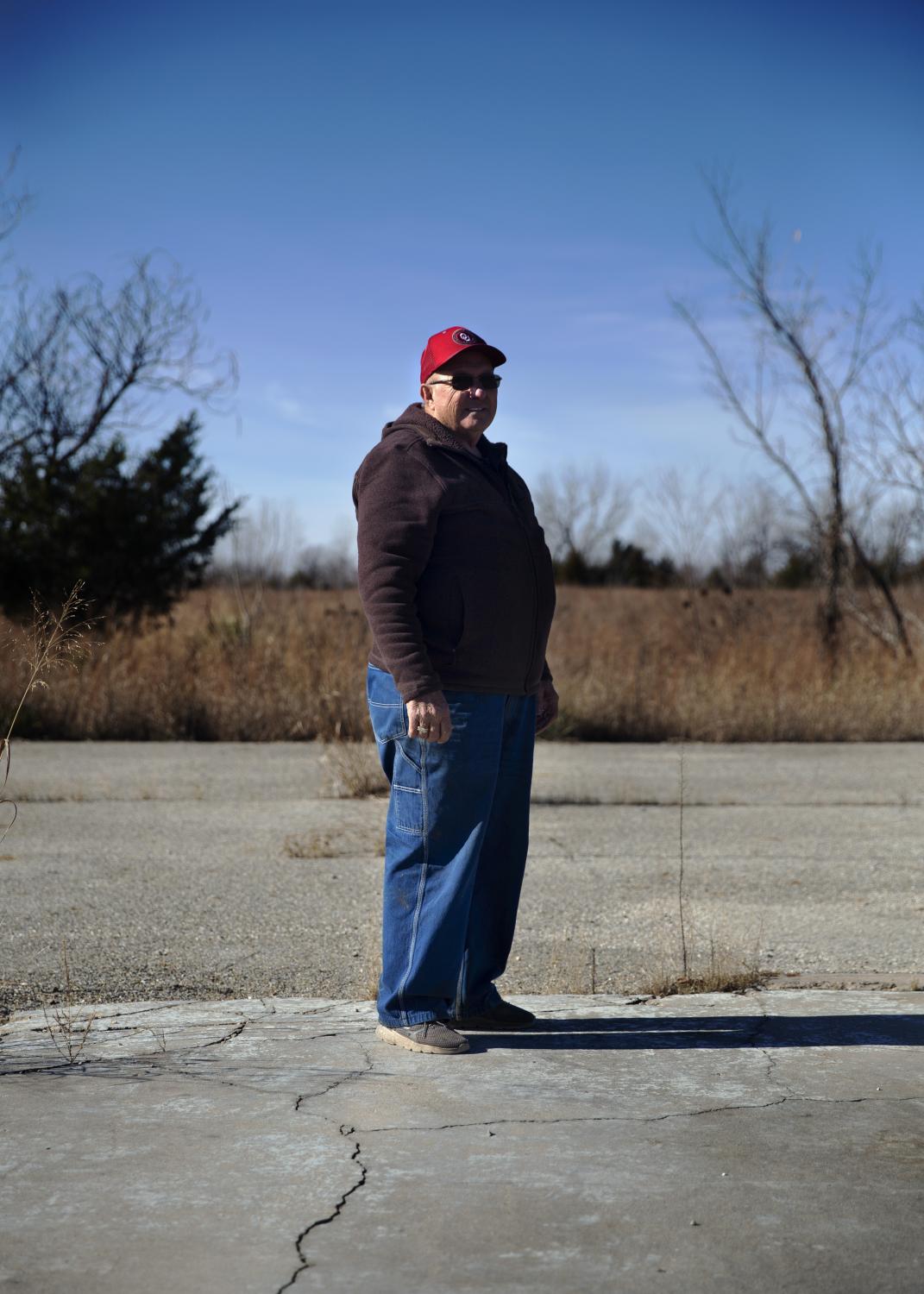 6 / 16
Tom Houston poses for a portrait. Houston told me I'd never find another group of people that loved their town the way Picher's former residents still love the town. 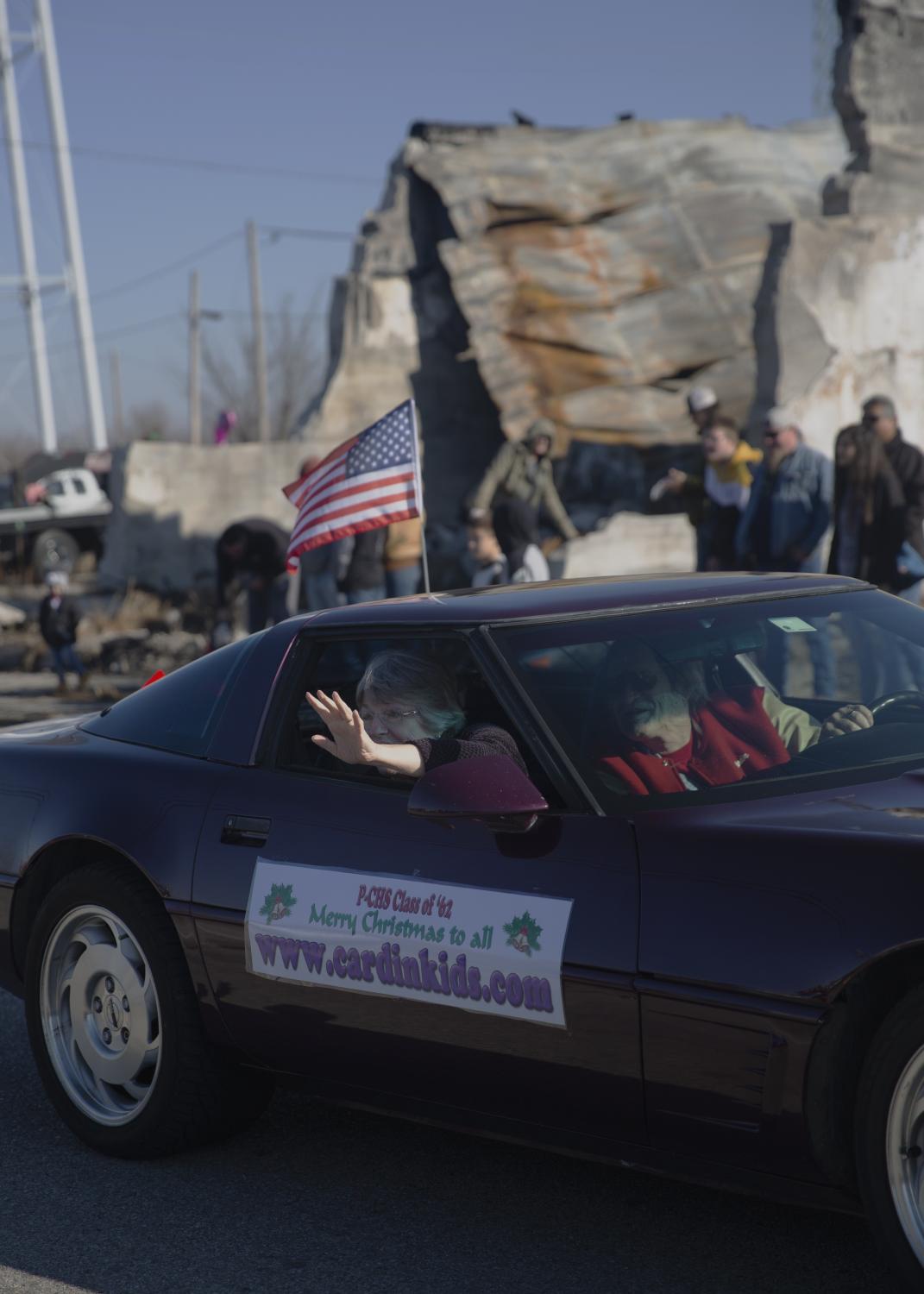 7 / 16
Picher's annual Christmas parade was like Torn Houston's words made manifest. The whole event felt more like a family reunion. People ran into the middle of the parade to hug people on floats and or shouted across the road at their long ago neighbors. "When they make a lake they move the whole town together to a new location. That's what they should have done to Picher," Mary Ann Heck (not pictured) told me. 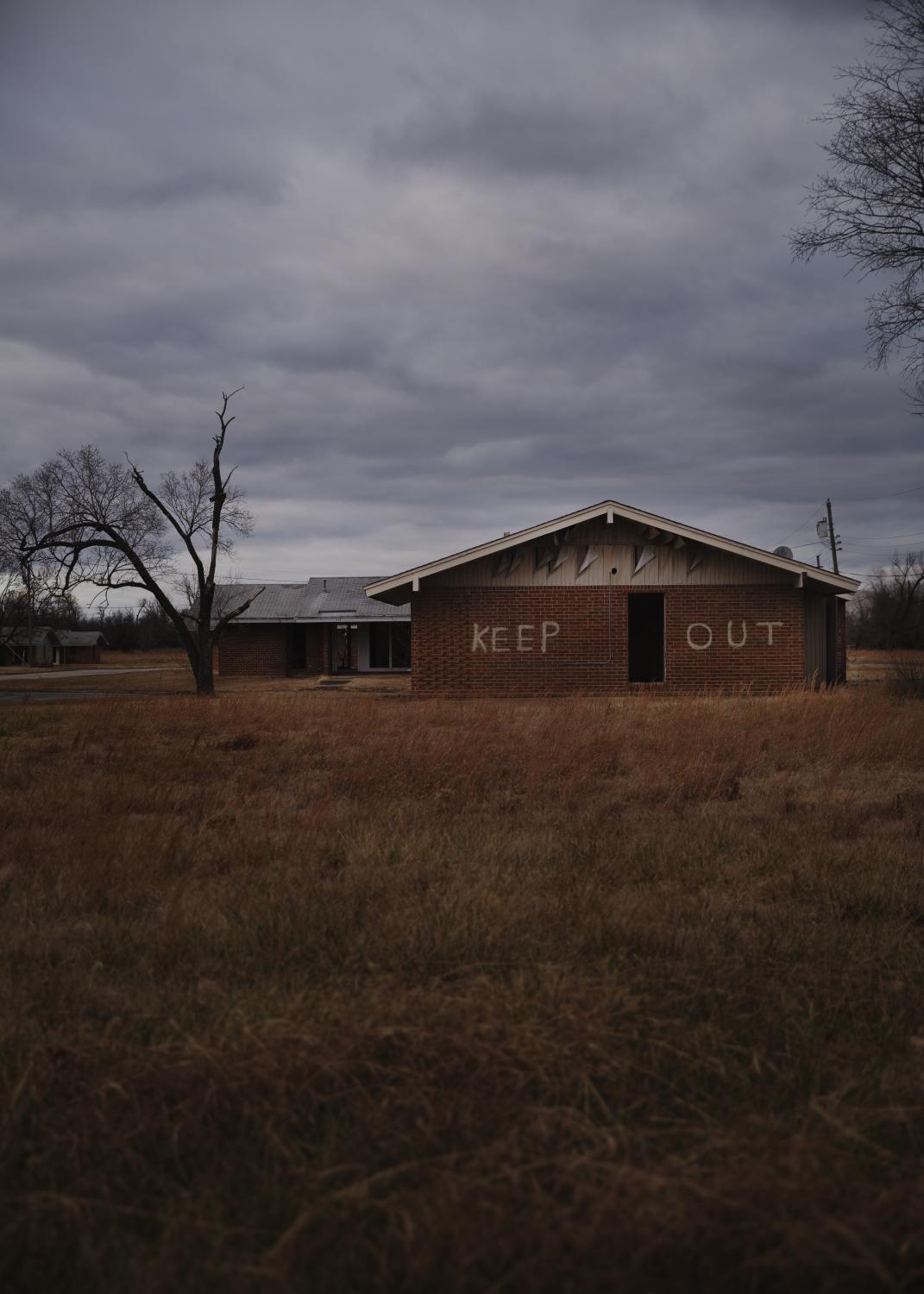 8 / 16
Most of the time, though, Picher is relatively empty. Very few houses survived the 2008 tornado and many that did were torn down. Still, some remain standing and the Quapaw Marshalls sometimes use those still left for training. 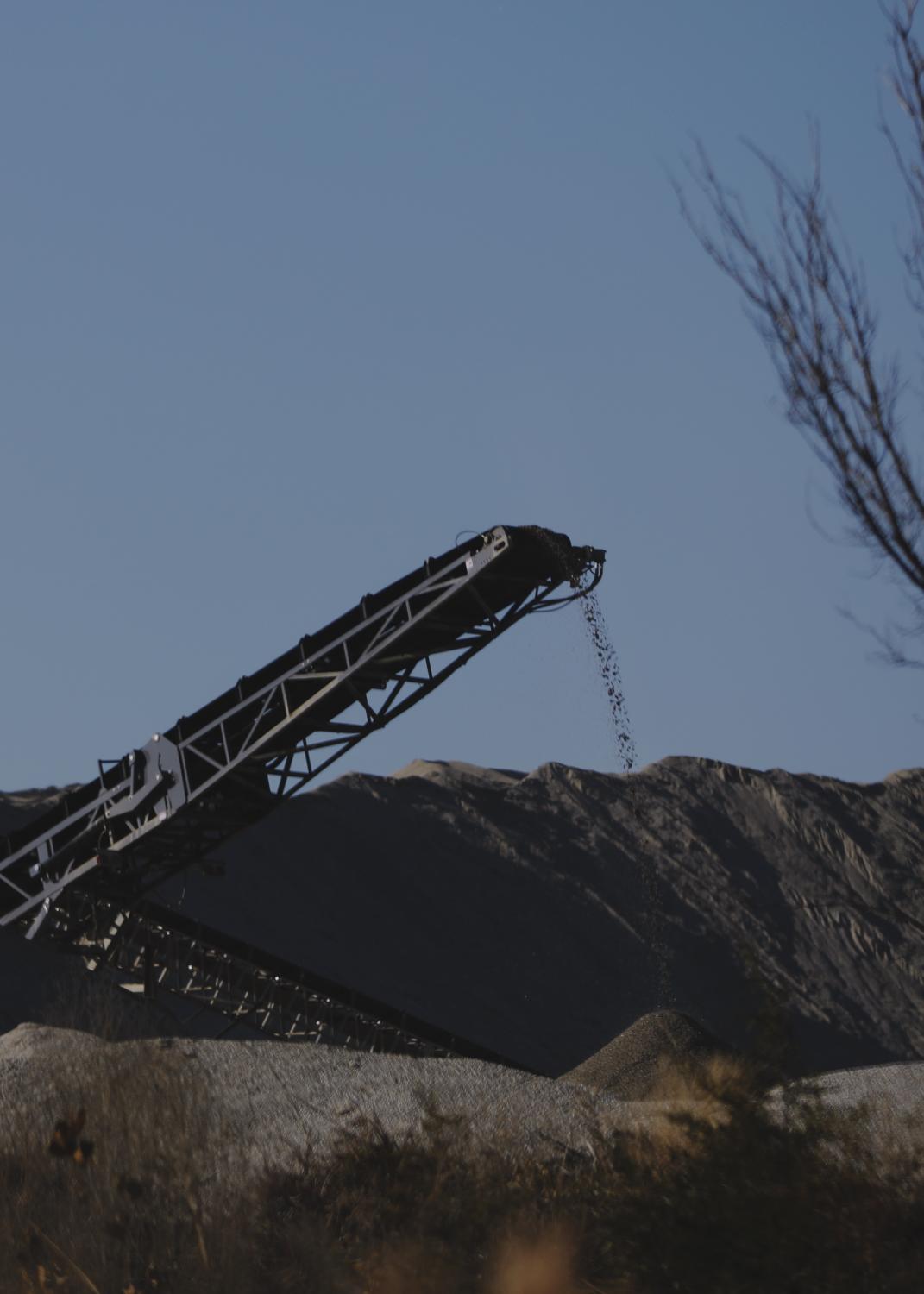 9 / 16
The old mines still serve as a place of business too. The mines may have shut down nearly 50 years ago but the chat produced by the mines is still used for construction projects — mostly in concrete I'm told. The EPA and the Quapaw (O-gah-pah) used some of the chat to fill back in the old mines. 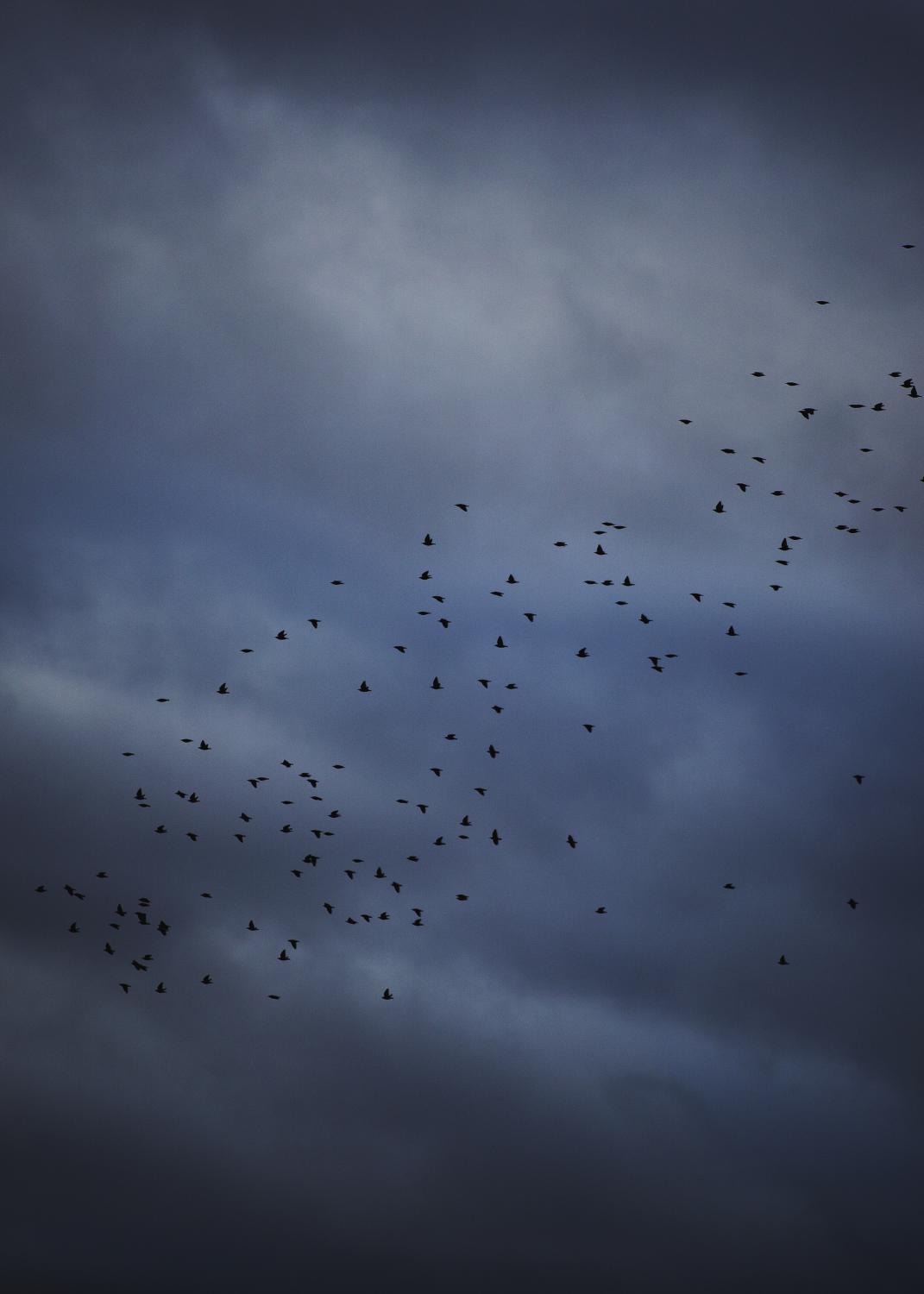 10 / 16
Birds in the sky over Picher. “When we were offered the buyouts many people felt like they had to take it,” Sherri Mills told me. “People felt like if they didn’t take it the government would say ‘well it’s Indian land’ and they’d be forced out anyway. Better to take what little we could get than start over with nothing.” 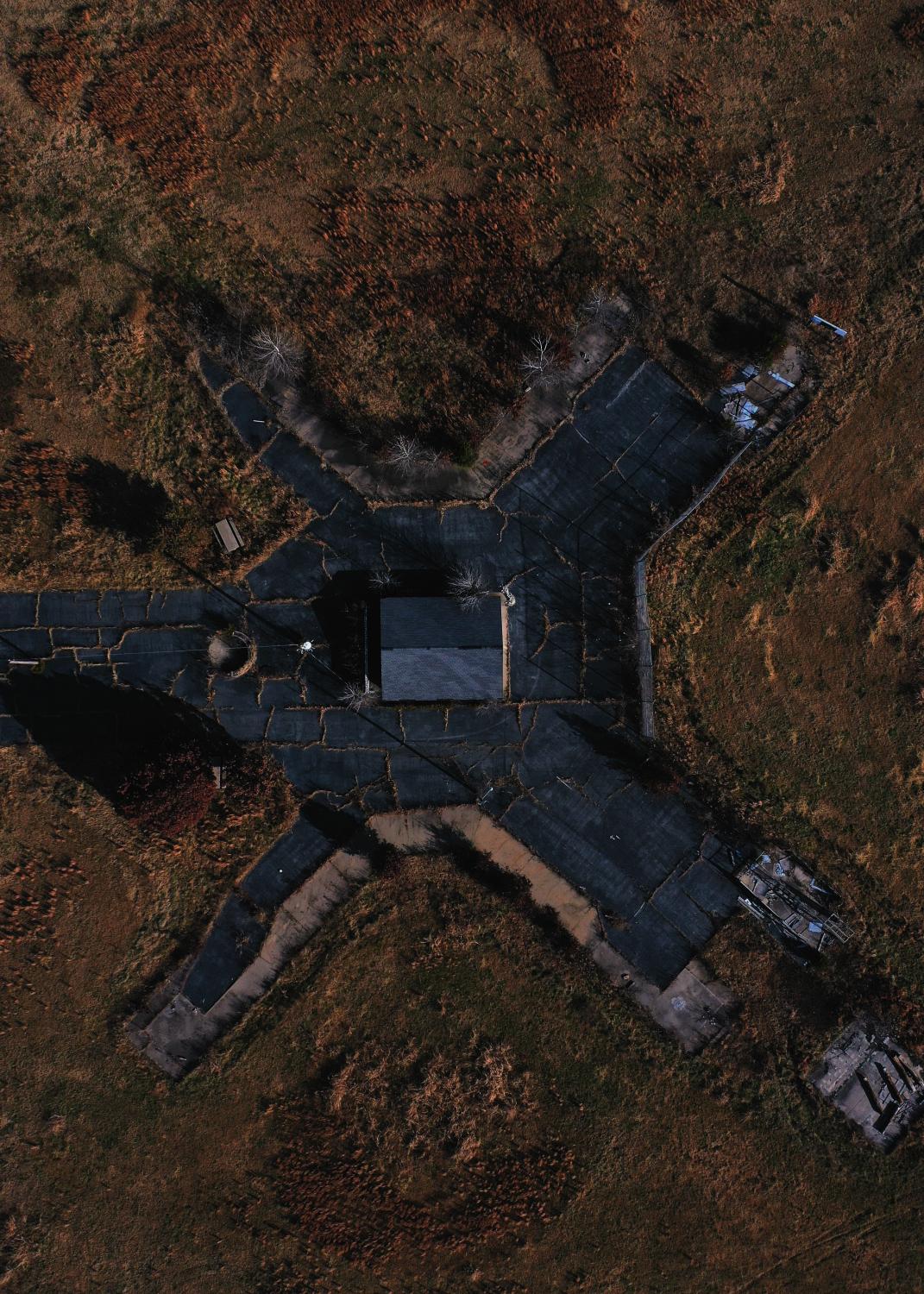 11 / 16
At one point Picher reportedly had two hospitals and over a dozen bars. At its height the town was home to around 20,000 people. Pictured here is all that remains of the baseball diamond and concession stand near the Picher-Cardin high school. 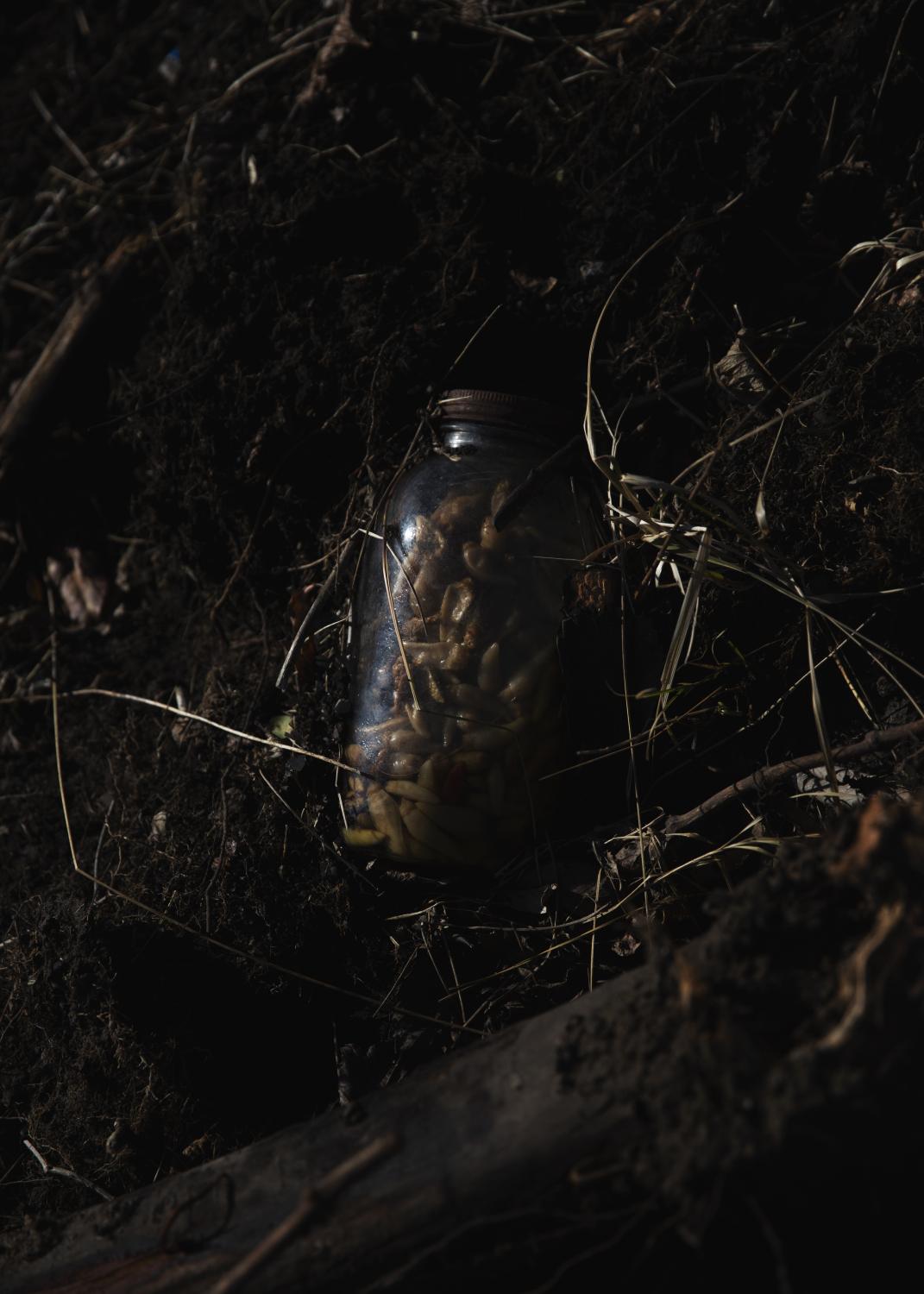 12 / 16
A mason jar full of pickled peppers. On May 10, 2008 Picher was struck by an EF4 tornado. At least 4 people were killed in the Tornado. A few of these jars full of different vegetables lay on the ground on the site of one of the homes destroyed by the tornado. 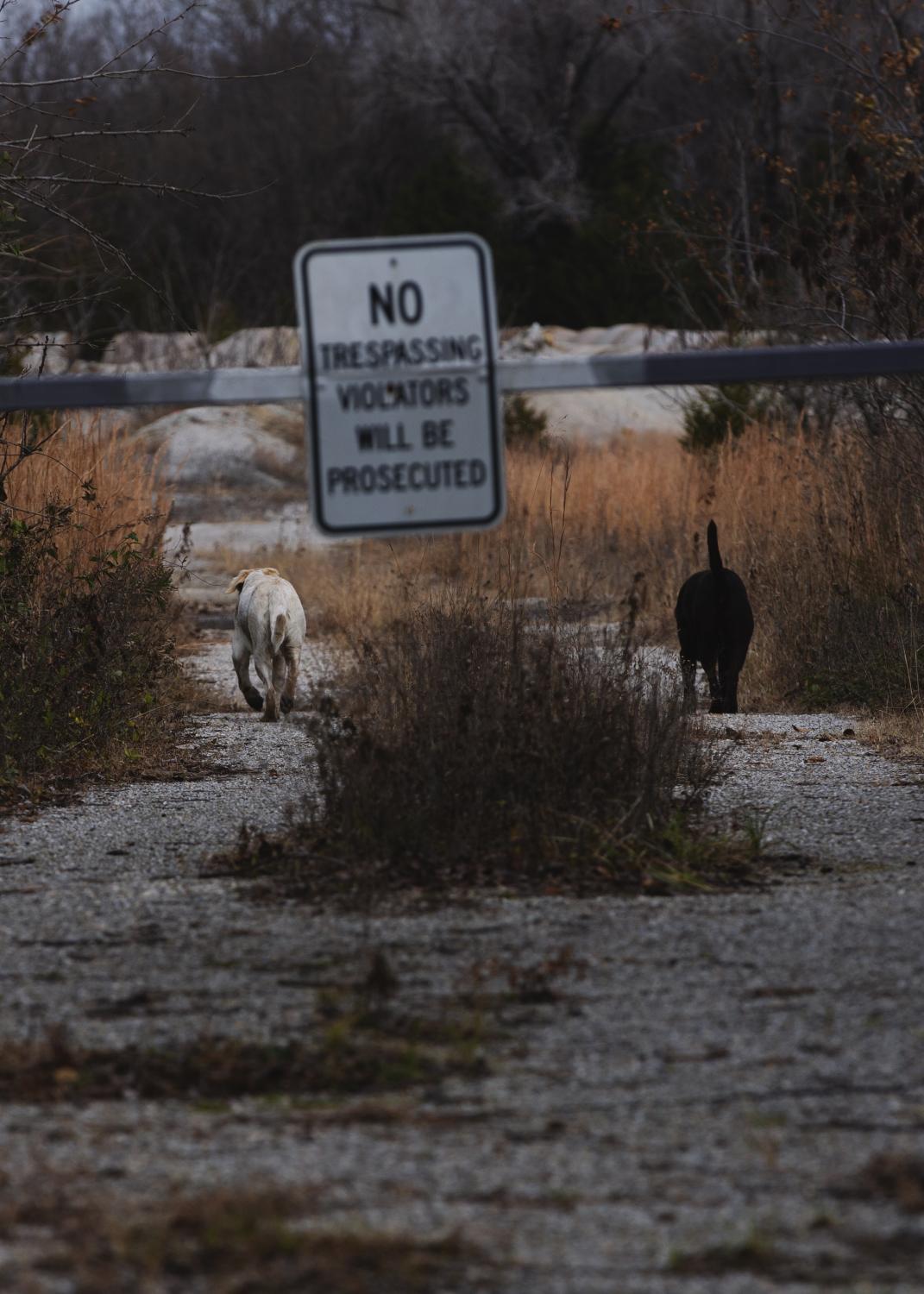 13 / 16
Two dogs decide to do a heckin' crime and trespass. Even after nearly everyone left town life still continues in some form or fashion. As far as I know these two dogs were strays, neither had a collar on — though both were pretty friendly and didn't look malnourished. I haven't seen them since this encounter. 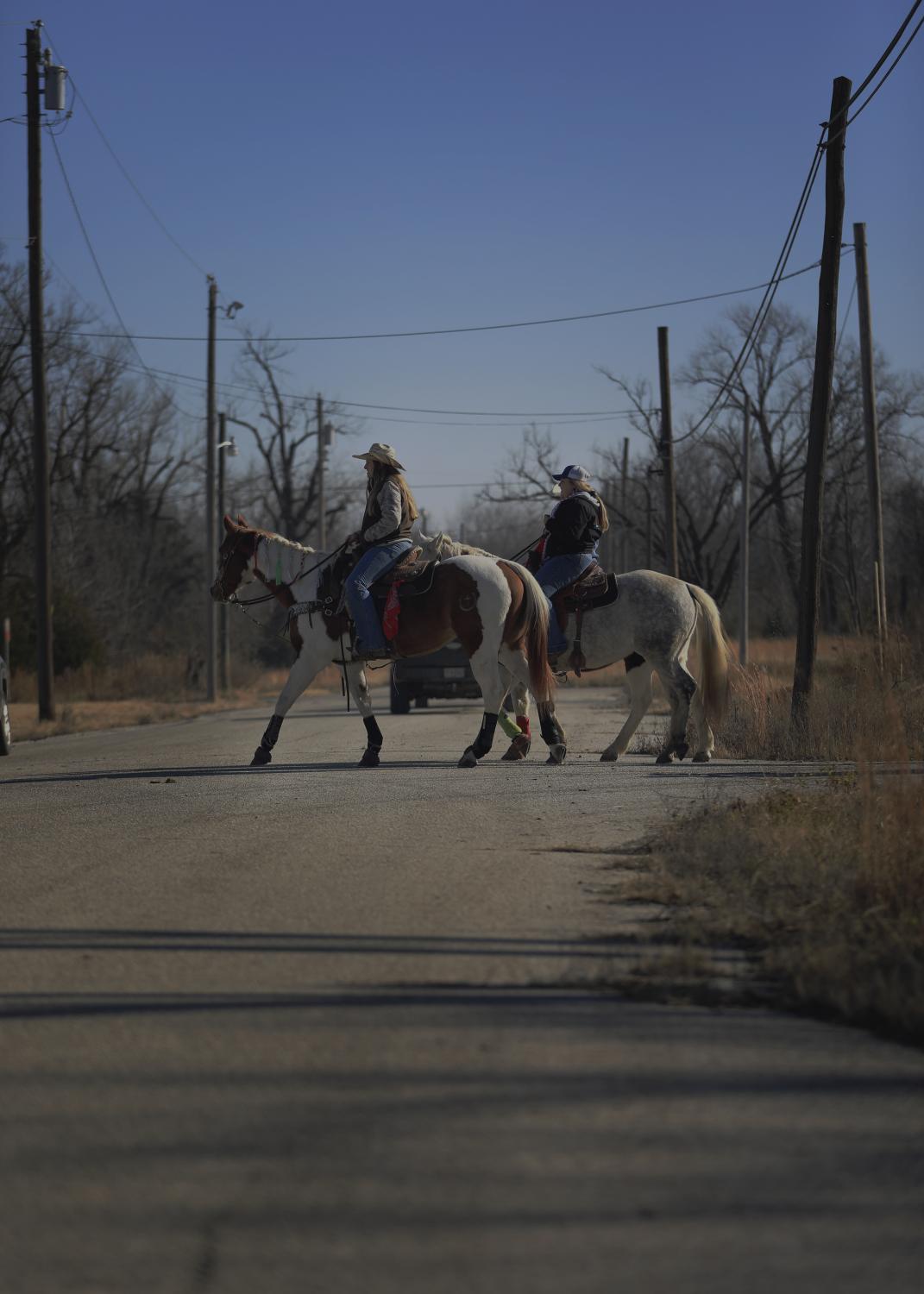 14 / 16
The Picher Christmas parade welcomes anyone who wants to participate. In this case some horse back riders walked the short distance from the old high school to what was once a four-way intersection in town. 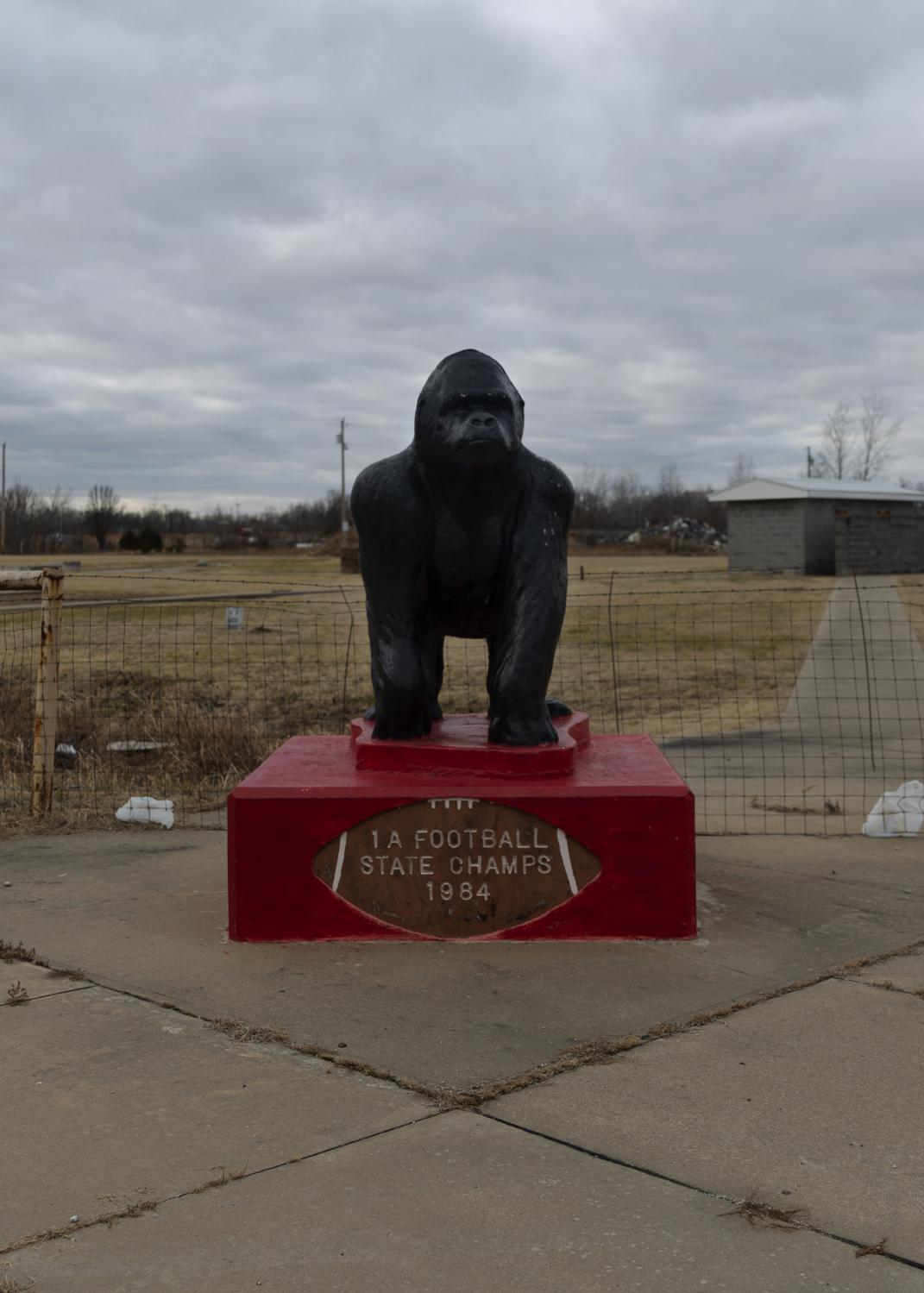 15 / 16
The gorilla and the high school are still very important to the previous residents of Picher. During the summer they have an all school reunion at the college located not far down the road in Miami, Oklahoma. The organizers of the all school reunion are also working to gather funds for a more permanent monument to the town they so love. 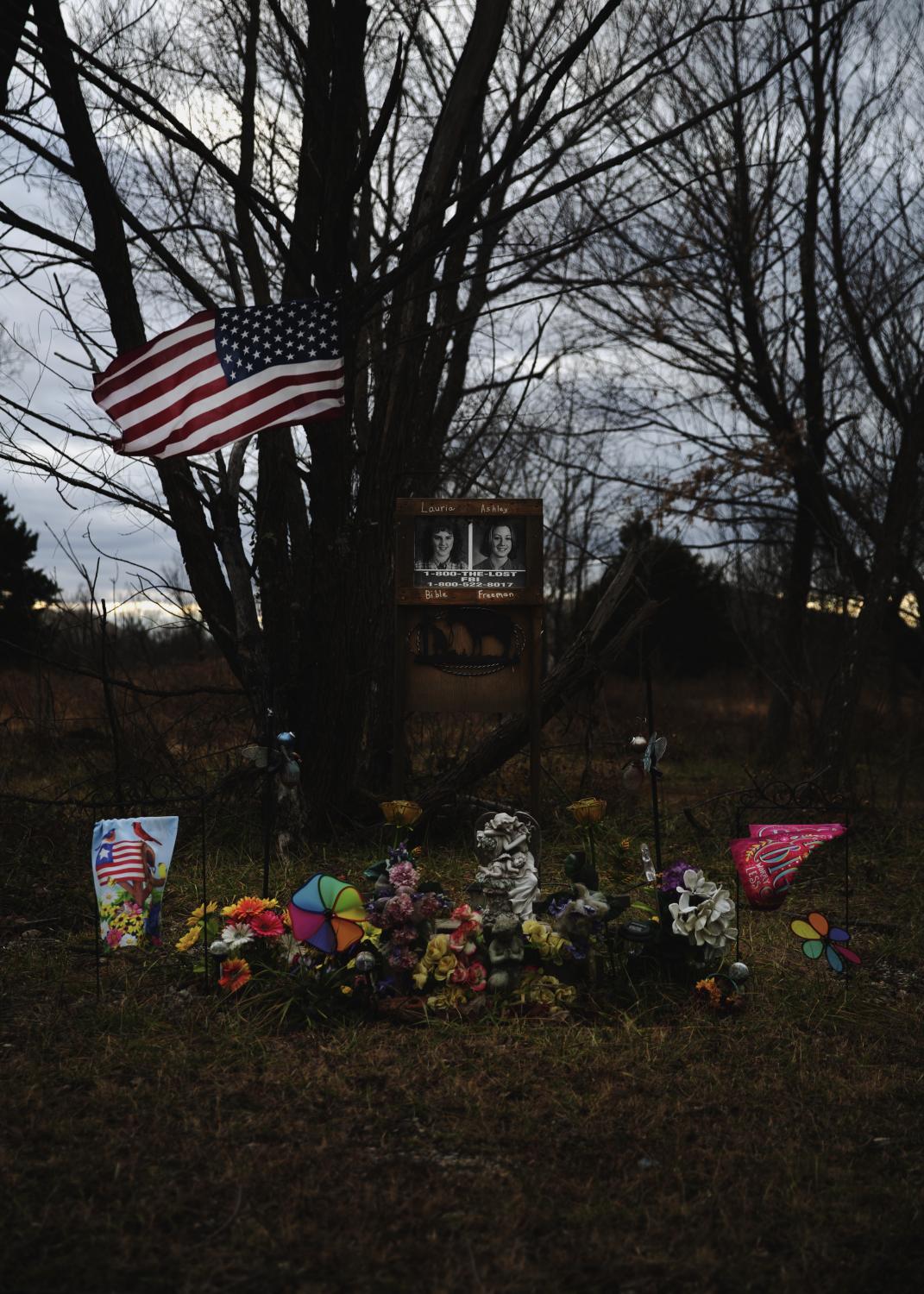 16 / 16
A shrine to Luaria Bible and Ashley Freeman sits at the site of the house police suspect the two were held at before being murdered. The girls went missing in 1999 and were 16 years old. In April 2018 a man named Ronnie Busick was charged with the murder of the two girls. Two other men are suspected of being involved but are now dead.

This is an ongoing project ​​​​ Picher, Oklahoma was once a prosperous mining town. At its height it was home to around 20,000 people. The mines closed around 1970 and the population began to take a nosedive from there but it held on until the late 2000s....

Ethan Weston is a freelance documentary photojournalist based in the mid-western United States focusing on environmental and conservation stories.